Lawrence-Dill named recipient of YWCA Women of Achievement award; recognized as a fellow in FSLI 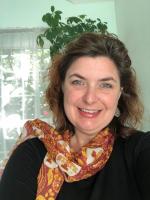 Dr. Carolyn Lawrence-Dill, genetics, development and cell biology professor, became a recipient earlier this year of a Women of Achievement award from the YWCA Ames-ISU. The award recognized Lawrence-Dill for her “hard work and dedication to fulfilling the two-prong missions of the YWCA—the empowerment of women and the elimination of racism.”

Nominated by GDCB’s Dr. Geetu Tuteja, Lawrence-Dill was recognized for the award at the YWCA Ames Women of Achievement Reception in early March.

In addition to being a recipient of the YWCA award, Lawrence-Dill was honored at the Association of Public and Land Grant Universities annual meeting late last year in San Diego for successfully completing the Food Systems Leadership Institute (FSLI) as a fellow in cohort 13. Lawrence-Dill was accepted into the competitive, two-year leadership training fellowship with the FSLI after being nominated by College of Agriculture and Life Sciences Senior Associate Dean Joe Colletti.

FSLI is organized by the Association of Public and Land-Grant Universities (APLU) with support from the W.K. Kellogg Foundation. The FSLI curriculum lays the groundwork for leaders who will transition food systems research, education and outreach to broader, more holistic approaches.

About participating in the program, Lawrence-Dill said, “As components of the program, I have carried out an organizational change project, engaged two mentors (Ruth MacDonald and Sen. Chuck Grassley), and participated in three one-week residential training sessions at other Land Grant and public universities (North Carolina State University, The Ohio State University, and CalPoly). I also benefitted from some invaluable guidance provided by a professional coach as a part of FSLI.